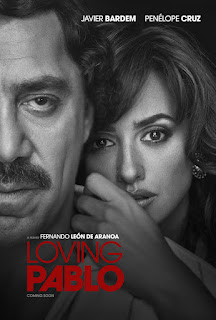 Am I the only one who loves not only movies with British accents but also those that have the Spanish accents? Like those Hispaniola accents in some of the amazing soap operas I know of. Loving Pablo, will indeed suit you if your taste and mine are alike. The Hispaniola accent will surely turn you on!

Set in the late 80’s and early 90’s, Loving Pablo movie follows the life of a once poor Pablo Escobar, who rose to being a tycoon, thanks to the large drug trade he managed. His life is narrated by a famous TV host, Virginia Vallejo, was also part of Pablo’s life and got to enjoy some of his wealth too.

Pablo Escobar started from the ashes where he was totally poor but resolved to engage in drug dealing back in Mexico. Through his hard work in the drugs industry, he got himself millions of dollars. Upon seeing this success, he resolved to spread his business across the whole of America. Together with the other business moguls, they shared out America states amongst themselves.

The only problem hindering their business was the government. Strategically, Pablo and his associates funded most of the candidates during the general elections and in return, they got permitted to fly in their drugs without restrictions.

Insecurity and substance abuse rose alarmingly in America that the security agents in the government swore to do something. All the people that tried to interfere or hinder Pablo’s drug dealing business were brutally shot right in the head. With the strategic planning that Pablo has laid out, will the government take him down? Who are going to betray Pablo Escobar? His wife? Children? Lovers? Associates? Watch out the movie to get all these burning questions answered, unless you want spoilers!!